A trip down to Athens, Greece

Greece has always been a country that I MUST GO before I die, because of my fascination with their mythology, the stories of their Gods and Goddesses, the war heroes, the philosophers, poets and playwrights and the many aspects of our lives originating from there.

It's like the birthplace of culture as a whole. Literature, mathematics, science, art, society etc. The Olympics started from there. Names of Sororities and Fraternities are after their alphabet. Things we know now as understood facts of life were thought of in Greece thousands of years ago.

We got our first taste of the amicable Greek service when we touched down. The cab driver who drove us to our hotel was incredibly helpful, eagerly suggesting places we could go to and pointing out different monuments as we cruised past. His English was not fantastic, yet he kept trying, which I thought really highly of, because some cabbies would do only the minimal, which is to ferry us from the airport to the hotel, collect money, and drive off.

We stayed at Soho Hotel near the acropolis (20 minute walk). It's in a narrow one-way street, and rather inconspicuous. The receptionist was just as eager to help with navigation to the various attractions and to get to our next city. Their service is really applaudable! 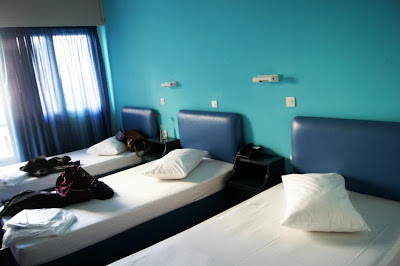 I love the colour scheme, it's like their national flag! 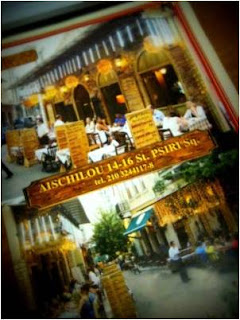 We walked to Monastiraki for dinner. It was one straight road down, and I felt like we were walking through Chinatown on one side and Little India on the other. Tried searching for the restaurants in my Let's Go Travel Guide but one of the hosts took a look and told me that all but one have closed down, because of the poor economy. We settled at a local rustic restaurant. 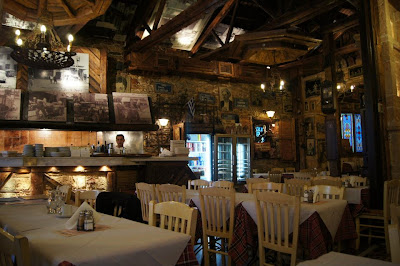 
The food was amazing  and the portion was HUGE. The cute waiter later served us two double shots of tequila on the house, which was a nice gesture, but neither of us drink, unfortunately.

We wandered around Monastiraki, which, after dark was lit up with the orange glow from the street lamps, the aroma of food wafting in the chilly air as we strolled down the meandering cobble-stoned streets, lined with restaurants and bars. Most people were eating al fresco, so the sounds of their conversations and laughter filled the air, along with the acoustic music playing indoors.. I was in love. It was exactly like how I imagined the Grecian nights to be. 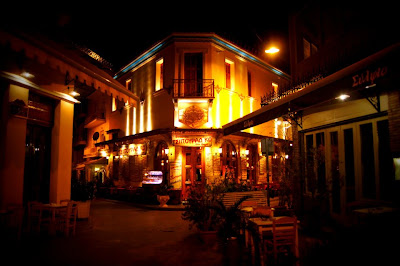 Walked to the Acropolis in the morning. The sun was amazing, I miss the blinding rays that will make you squint without the protection of sunglasses. 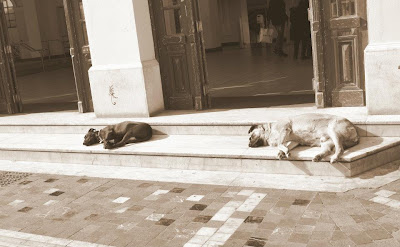 This is how strays sleep in Greece. Everywhere we go! 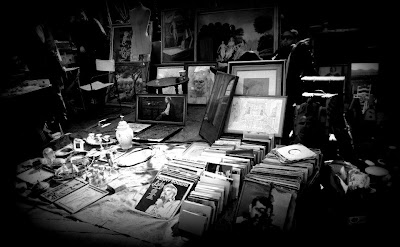 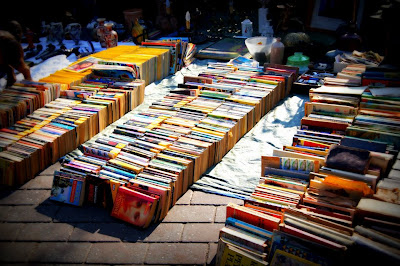 Chanced upon the Athens Flea Market. Lively and bustling, like how a market on a Saturday morning would be. 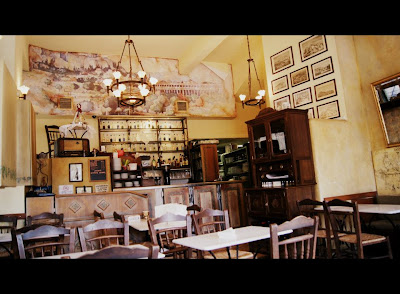 Had breakfast at the entrance of the Agora. 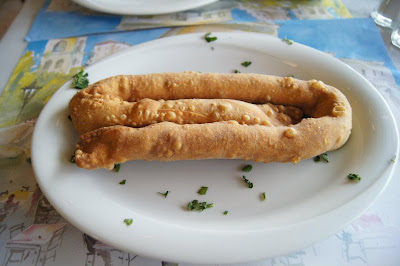 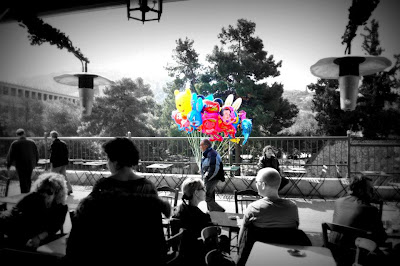 Sighted in every city of Greece as well!


After breakfast, we entered the Agora, which was the 'heart and soul' of ancient Greece. It was the city's marketplace, which is basically the focus of everyday life from the 6th century BC all the way through the AD 6th century. 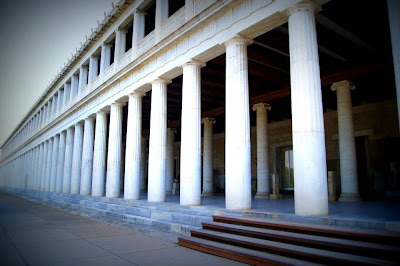 Stoa of Attalos- Now an archaeological museum containing relics and sculptures from the site.

It was built by Attalos II, the King of Pergamon, as a gift to Athens. It used to be filled with shops and held informal philosophers' gatherings. Standing in the museum, reveling in the fact that great men such as Socrates, Aristotle and St. Paul were once upon a time where I was; it felt completely surreal. 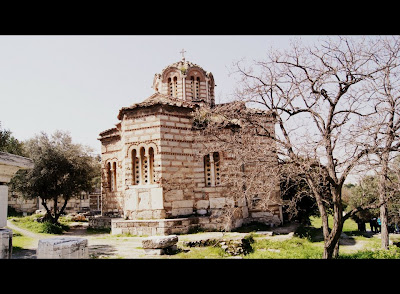 Church of the Holy Apostles Solaki, the only other temple besides the Temple of Haphaestus that remained intact since its foundation. 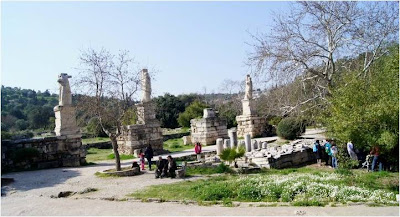 Odeon of Agrippa, which used to be a concert hall. The roof collapsed, possibly because of the lack of interior supports. Now, standing proudly in its own ruins are 3 colossal figures of giants. 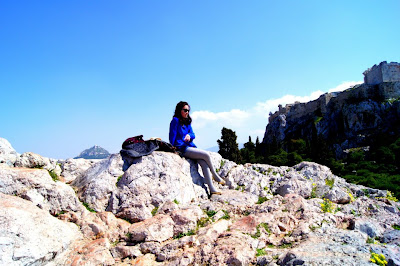 Challenging (to me, someone with zero sense of balance) little hike up was completely worth it. Standing at the top, the view overlooks the whole city of Athens, filled with tiny houses clustered together, spreading outwards till it seems to meet the sky. 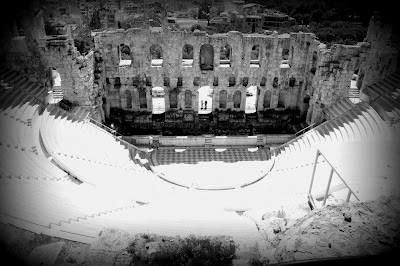 Theater of Herod Atticus, built by the Romans in 161 AD and  still used today for classical concerts, ballet, performances of high cultural value. 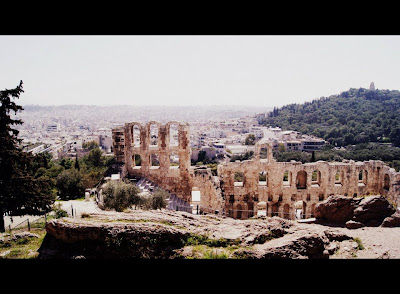 Further on is the Theater of Dionysious the first stone theater and home to Sophocles, Aeschylus, Euripides and Aristophanes. 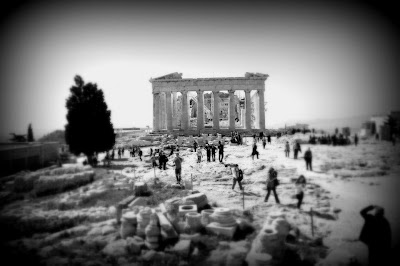 The Parthenon, built in the 5th century BC as a monument to the cultural and political achievements of Athens. The term acropolis means upper city, where the inhabitants can go as a place of refuge in times of invasion, thus the most sacred buildings are usually on the acropolis. It's the safest most secure place in town. It took 9 years to build, and served as the home of the giant statue of Athena. From a temple it became a church, a mosque and finally as a storage facility for Turkish gunpowder. In 1687 the Venetians bombarded it from below. A cannon ball hit the gun powder and blew it up.

What makes the Parthenon so facinating is that each piece of the Parthenon is unique and fits together like the world's biggest and heaviest jigsaw puzzle. Lines that look straight are actually not. The ancient Greeks understood the mechanics of site and that to make a line look straight it had to be tapered or curved. (Athensguide.com) 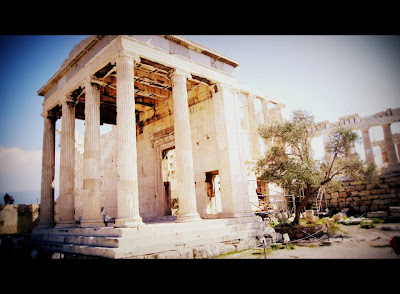 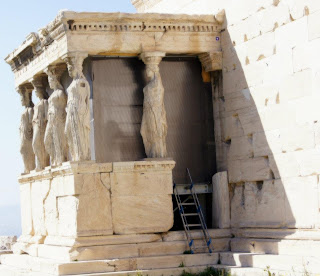 The Erecthion- where Poseidon and Athena had their contest over who would be the Patron of the city. Poseidon thrust his trident into the rock and a spring burst forth, while Athena touched the ground with a spear and an olive tree grew. Athena was declared the victor and the great city of Athens was named for her.

The building itself contains the porch of the maidens or Caryatids which are now copies. The funny thing is that, in photos, I have always thought that these statues perch over the edge of a cliff (possibly overlooking the city), like i cropped this photo. But it actually sits on grass, facing inwards, to the Parthenon. 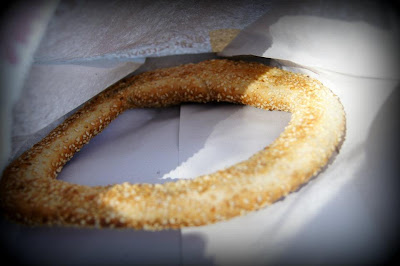 Awesome savoury Greek snack, ubiquitous along the streets in pushcarts. 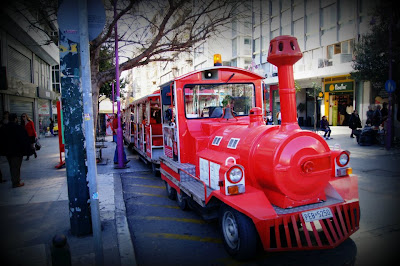 Whilst eating our pretzel, we saw a man running after and jumping on this train (The Happy Train). So we decided to do the same, only to have the wntire train stop for us and have the guide walking all the way to the back to ask us for a fee. 6 euros, so we proceeded. Best decision ever, after walking all day.

The toy-like street train wheeled us to the various attractions of Athens, from the Acropolis, to Plaka (the oldest area in Athens), the Temple of Zeus, Thisseon, Ancient and Roman Market, Zappeion, Panathinaiko Stadium, Theatre of Herodes Atticus, Hadrian Arch, Monastiraki Square, and finally dropping us off at the New Acropolis Museum.

I copied all that from the Happy Train website because, to be honest, the guide's accent was so heavy, her English sounded like Greek to me. & it didn't help that I had a joker of a local and his girlfriend hopping on the train just for laughs, imitating everything the guide says, speaking so loudly in Greek, I couldn't hear the commentary.

I had a good laugh, though, because he was so humorous, waving at diners when we chugged slowly past the row of restaurants, like he was the Queen. And when the street touters walked by with their humongous balloons, he pretended to burst them all with an imaginary needle. Joke! 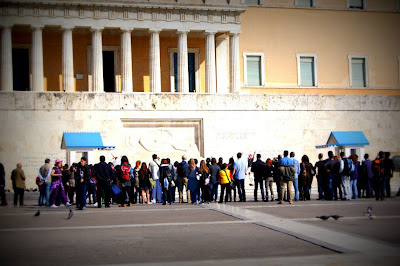 This is the Tomb of the Unknown Soldier in front of the parliament building in Syntagma Square. It is the heart of the city, where the most expensive hotels are found, as well as Ermou Street, the city’s most expensive shopping strip!

Every hour, guards called Evzones perform the changing of the guard. The Evzones wear uniforms with pom-poms on the toes of their shoes and skirts with stockings. The 11 o’clock a.m. Sunday changing of the guards at the Tomb of the Unknown Soldier Greece is supposedly a more elaborate ceremony, but I didn't have the chance to watch it. 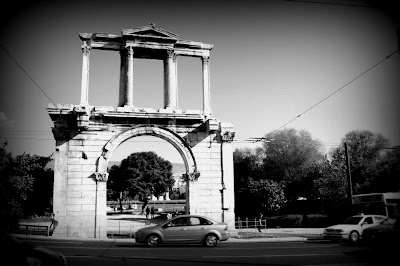 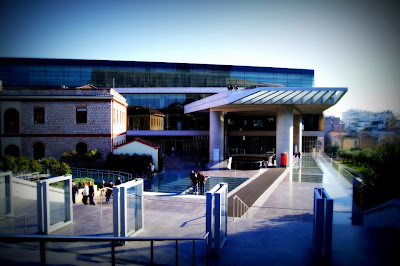 The Acropolis Museum, which is free for students! Actually, I didn't pay a cent to enter any of the sites, because they are all complimentary for EU students! 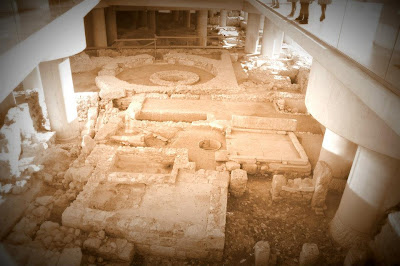 After an hour or two of admiring the sculptures and reading the history of the glass panels, we were completely mentally zoned out. Sat in a corner and chatted 'til darkness fell outside, before we left for dinner (pita & crepe!) and took the 70cents metro back! 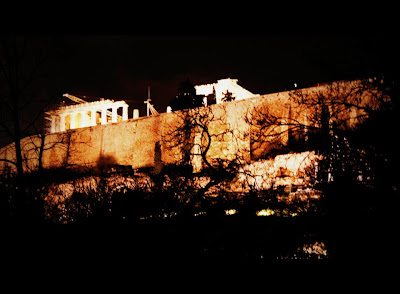 The Parthenon, standing in all its glory in gold luminescence, contrasting the starless night sky.


Got terribly lost while finding our way back to Syntagma Square in the morning, trying to find any travel agency to book our bus tickets up to Meteora, which we were leaving for the next day. We mistook the National Library for the Parliament building. In our defense, they looked really similar! After walking in circles for 2 hours, we finally found the actual parliament building. From there, we ventured into the little roads in search of a travel agency.

The first one we walked past looked pretty dubious, and the second one, we stayed there for hours and hours.

Apparently, there was going to be a boat strike for the next three days, so it was impossible for our planned itinerary to carry through. So down the drain it went, all our money we paid for the hotels' deposit. Some were 10% of the actual stay, so it was not too bad, but the most expensive one we booked, in Santorini, we paid for that in full! Oh, the agony.

Our travel agent was incredibly helpful, planning everything for us from scratch, and he threw in a discounted private tour to Delphi and Meteora! i snuck a peek at the price list from my tour guide, we paid less than half the price! Because we were leeching on an Argentinian family's private tour. Everything got settled there, including hotels, flights, boats and transfers. 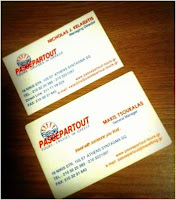 The contact of our saviors. Makis guided us through everything, and his daughter is an Olympic swimmer! He was proudly showing us pictures and stacks of newspaper article cut-outs to us. 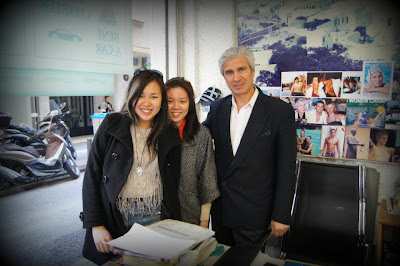 Left to right: Stephanie, her friend and their friendly tour-guide

It was then I realised how fulfilling a travel agent's job could be. Especially when the country is so prone to strikes and protests.

We shopped around the city center before strolling back to our hotel under the glorious sun, packing up and getting ready to set off on a brand new adventure to the mountains the following day!
Posted by NATASTRAVEL