Lose Yourself in A World of Falling Water

Namtok Thi Lo Su is the most famous waterfall in Thailand, located in the splendid Umphang Wildlife Reserve in the North’s Tak Province.  It has earned UNESCO World Heritage status, and while it is also the biggest waterfall in Thailand, it isn’t beloved because of teeming rapids crashing hundreds of feet like Congo’s Inga Falls, or because of a massive flow-rate and powerful roar like Niagara Falls in the US.

Rather, Thi Lo Su is known for its serenity and picturesque beauty.  In fact, one publication marks it as the 6th prettiest waterfall in the world, and several others list it in their “best” lists, too.  It is unique because of its multiple tiers, which emanate from Huai Klo Tho, a mountain stream located over 400m above sea level, and it links the Thung Yai Naresuan and Huay Kha Kaeng Reserves, forming Thailand's biggest wildlife refuge and one of Southeast Asia's most magnificent and unspoilt deciduous forests. 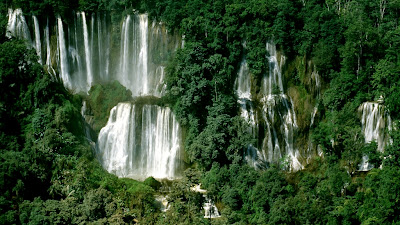 At Thi Lo Su, water spills over the edges of verdant, tree-lined limestone cliffs from three elevations, the water cascading nearly 300m by the time it completes its fall, which is spread out over the width of nearly four football fields.  Water feeds down from the uppermost level like rain running down stairs in a storm, white and frothy and fresh.  By the time it has reached the middle and lowers tiers, crystal clear pools have formed and they are irresistible if you have a mind for a refreshing dip.  Spend a day chilling in the clean, cool water and relaxing to the soothing sounds of the falling stream, or have a jump and a splash amid quite possibly the most beautiful backdrop for a swimming pool that you’ve ever experienced.

After bathing, and if you’re looking for more activity, you can explore the cave tucked behind the falls, and do plenty of hiking in-and-around the falls well within view, or earshot, of the tumbling water.  And why not explore?  After all, this natural gem is located in a pristine sanctuary covered by evergreen forest full of ironwoods and teak and bamboo, and is home to a splendid array of orchids, wildflowers and ferns, as well as numerous species of butterflies and birds, such as the rare and colorful hornbill. 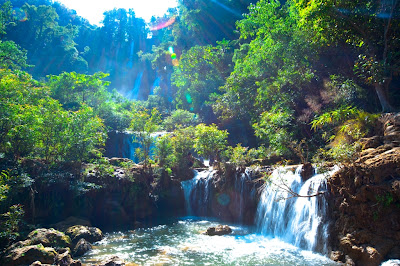 It takes some time and a bit of effort to reach this amazing oasis from Mae Sod in Tak Province, but that adds to the adventure, and while it makes for a great a day trip, if you’ve hiked in and spent all day swimming and exploring, consider spending the night camping in the grounds near the falls. 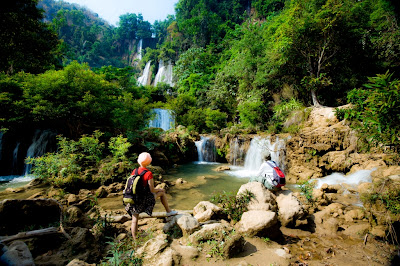 The best time to go is when the falls are at their most beautiful, of course, and this is during the wet season from June to November when water flow is at its highest.  The road leading to the area, however, may be closed at this time for safety reasons, so some hiking may be required.  The high season for tourists visiting Thi Lo Su is December and January when the water level is still fairly high, and the main road leading to the waterfall is indeed open to the public, but only four-wheel drive vehicles are recommended when attempting to pass the steep, slippery, yet incredibly scenic path.  One alternative means to reach the waterfall is by way of rafting, heading downstream along a peaceful stretch of the Klong River, and ultimately completing the journey either on foot or by car.

So if you’re heading to Thailand’s beautiful North, are looking for an outdoor adventure off the beaten path, and love nature and stunning outdoor environments, then Umphang Wildlife Reserve and Namtok Thi Lo Su are for you!